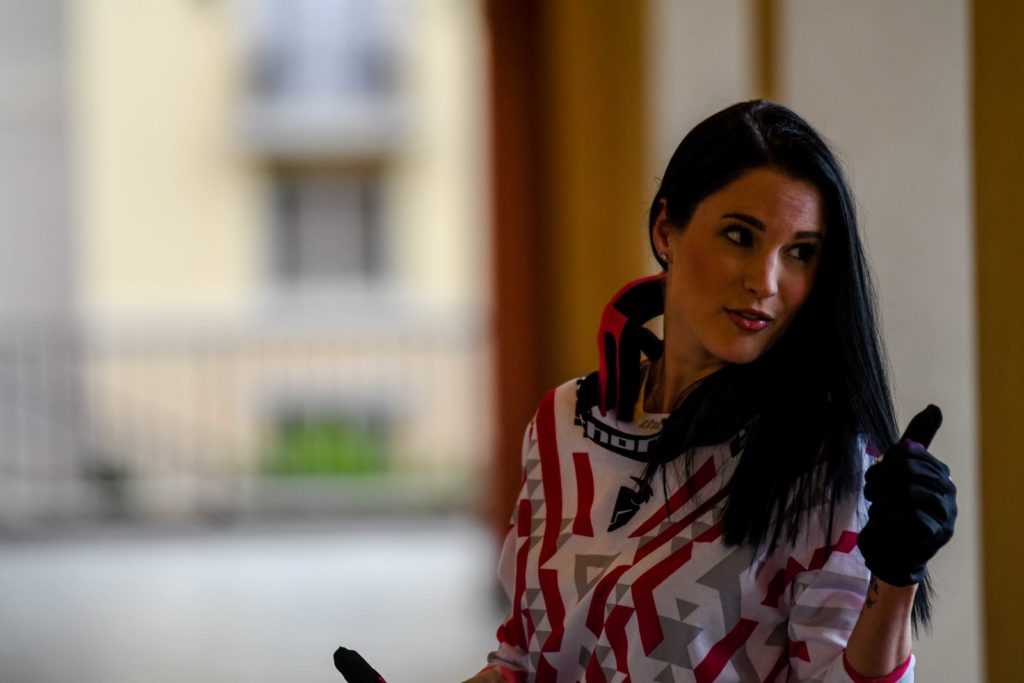 Let me first start off by apologizing for how lengthy this post is going to be. There is just so much to be said and seen within the bounds of one blog post! This also isn’t the typical blog post you would normally see coming from my site and I’m really excited to give y’all an inside look into a huge part of my life! I had so much fun writing this post sharing a passion my dad and I still share to this day.

This post is for all of the female dirt bike lovers out there! 🙌🏻

First things first; reasons why every girly-girl needs to have a tomboy side. I mean, judging from my upbringing, girls that act like dudes are WAY more fun and here’s why!

2. No other kind of girl knows how to get along with dudes better because we’re basically one of the guys… except we give birth every once in a while. 😜

3. We will call you out on ALL of the BS! Most of us are extremely blunt and LOVE to tell it like it is.

4. We will drink beer with you and eat lots and lots of pizza without worrying about our weight because most likely we’ll go kill it in the gym later. Or not. 💪🏻

4b. We do like working out… But not over the top… I mean, sometimes you just need that entire pizza…

5. We don’t give AF about what people think about us and for the most part, do our own thing.

6. The majority of days we don’t even consider putting on make-up or doing our hair but still somehow look remotely put together. Don’t get me wrong… I do love fashion BUT I’d rather be doing more exciting things than dressing up or putting on makeup!

8. We don’t mind getting dirty. That should be number 1! I’d spend all day outside shooting, hunting, riding, being in nature, etc.

9. And last but not least, similar to #8, not only do we take pride in doing guy things, we actually LOVE doing that kind of stuff. There’s no faking here! If you give us a challenge, you better believe we are going to do it and might even do it better! 💪🏻

Being a tomboy has been my life since I was a child and it all started in the womb when my mom knew I was a boy. She was so confident I was going to be a boy that they picked out one boy name; Garrett. Needless to say, she was a little surprised when I came out female! My mom kept telling me she was so shocked that I came out a girl and wanted them to keep double checking to make sure. 😂 Being girly just wasn’t in my genes and I wouldn’t have changed one thing about my childhood. I made so many amazing boy friends, had so many great experience and have so many fond memories of staying with my grandfather everyday while my parents worked. Being a tomboy has really made me a tougher person inside and out. I know all of you non-girly, girls know exactly what I’m talking about!

Some of my fondest memories growing up are spending time with my dad and doing boy stuff. Whether it be playing outside in the mud as a child, playing soccer for 15 years, riding dirt bikes, getting dirty renovating houses, etc. I was NEVER a girly girl. It always surprises people when I tell them my entire career is based along the lines of the fashion industry after I left my architecture job. I’ve always been a tomboy at heart and I don’t think anything has or will ever change. It’s always something that will bring me closer to my dad and I absolutely love that. My dad lives a few hours away so we don’t see each other too often but we always make time to watch Supercross together every Saturday evening. We’ll text each other saying “Are you ready for Supercross?! 10 more minutes!” I mean, I love that!! So I really wanted to surprise him with an amazing birthday treat and take him to Las Vegas for the last Supercross race of the season! 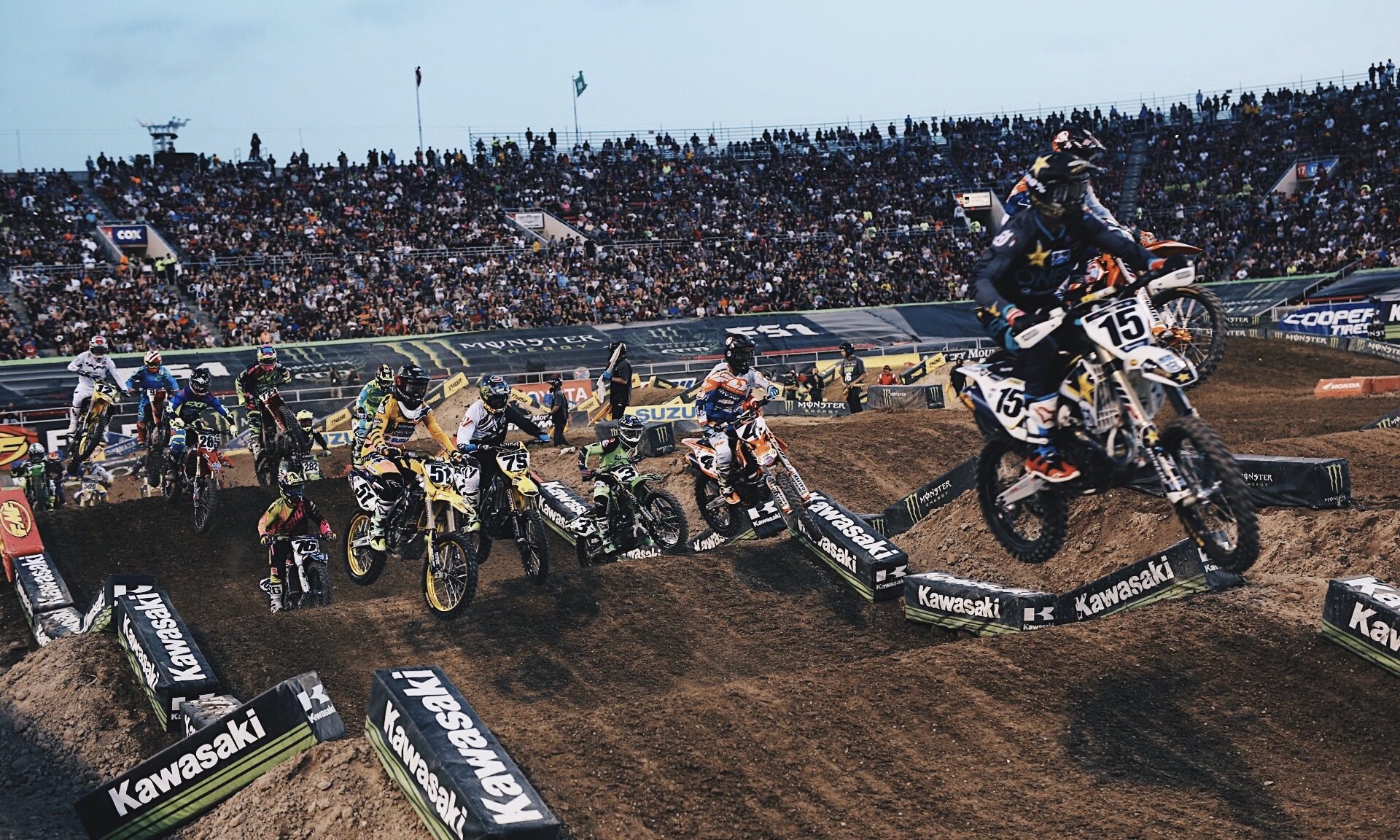 Talk about a whirlwind trip to Vegas! Such a whirlwind we were there less than 48 hours and didn’t even make it to the strip once! 😂 We landed Friday afternoon and immediately got settled in and started prepping for a quick evening shoot with Thor. I’ll get to that at the end of this post. All I have to say is such a blast!

The next morning we arrived at Sam Boyd stadium around 9am to get our media credentials and prep for the track walk with all of the riders and their teams. Talk about a once in a lifetime experience! We were up close and personal with the best of the best Supercross riders. It was awesome being down there pointing out our favorite riders and inconspicuously taking non-creepy photos of them that didn’t come out in focus at all. 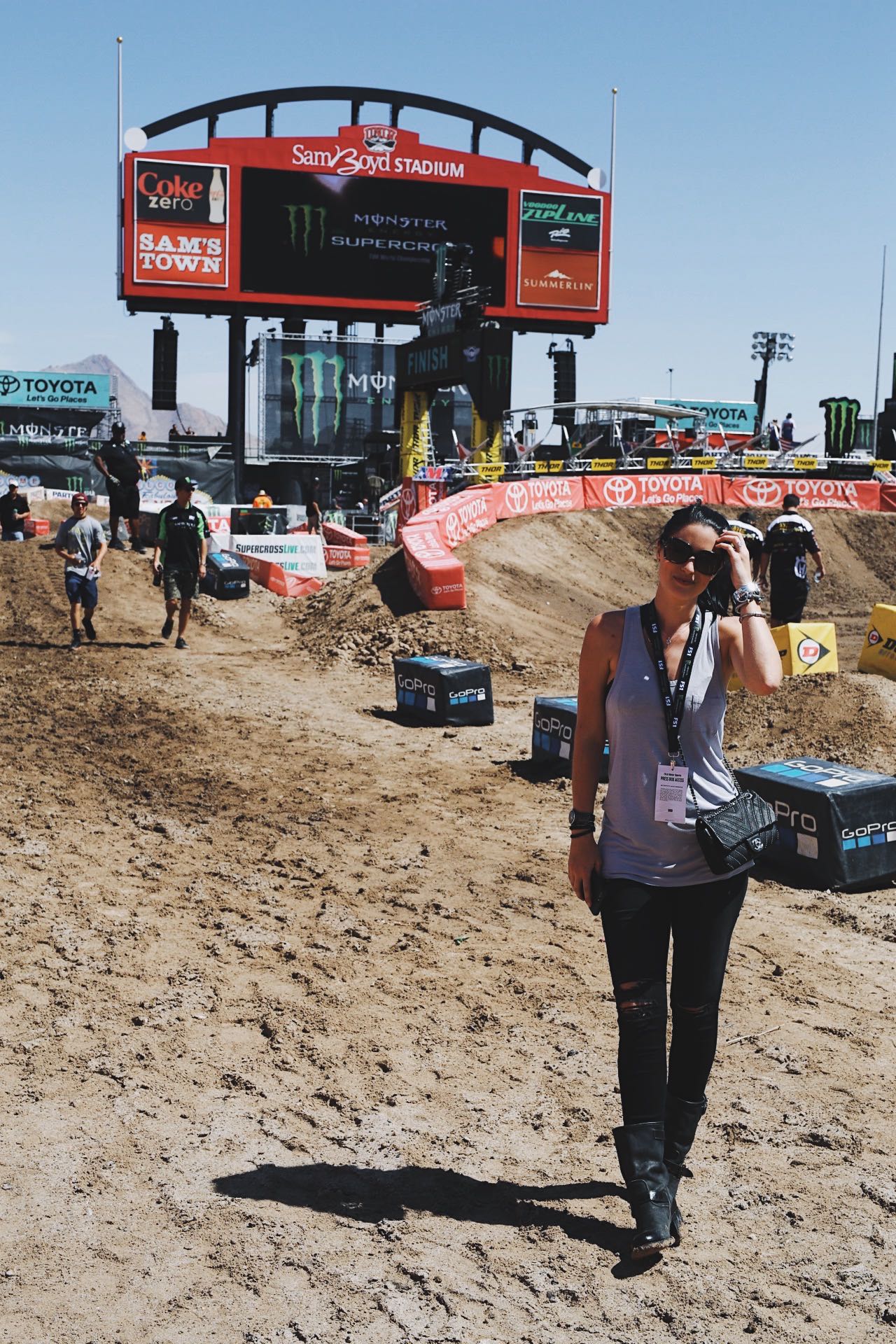 Once the track walk was over we made our way up to the press box to relax and wait for practice to start. If you’re not familiar with how these races work there are two different classes; 250SX and 450SX. Each class has set times and groups for their practice and qualifying rounds. Practice and qualifying normally lasts for about 5 hours and then they get the track ready for the different heats. Practices are some of the most exciting times because these guys are going all out testing out the track and seeing how hard they can push it before totally wiping out. We definitely saw some gnarly crashes throughout the day too! 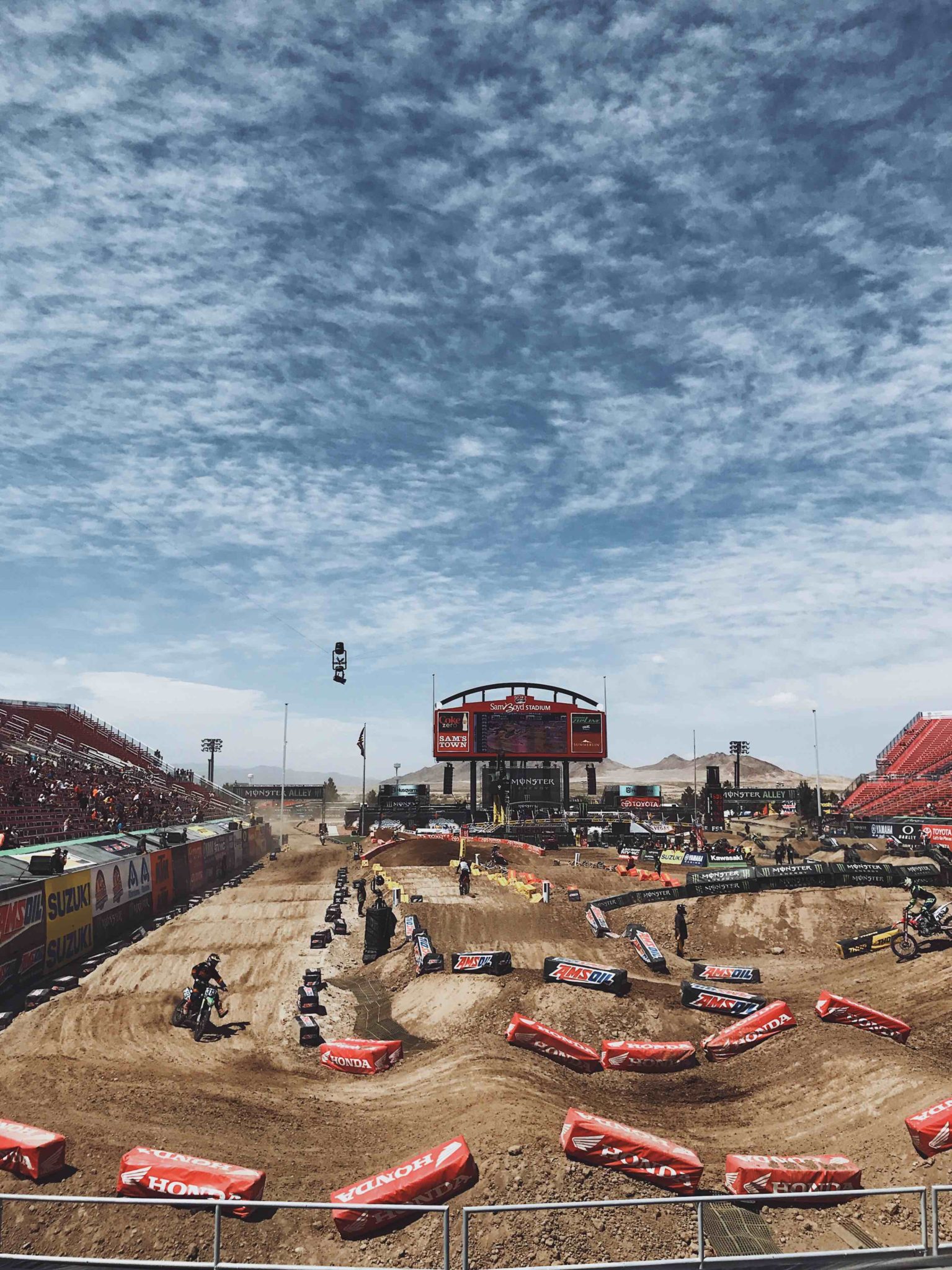 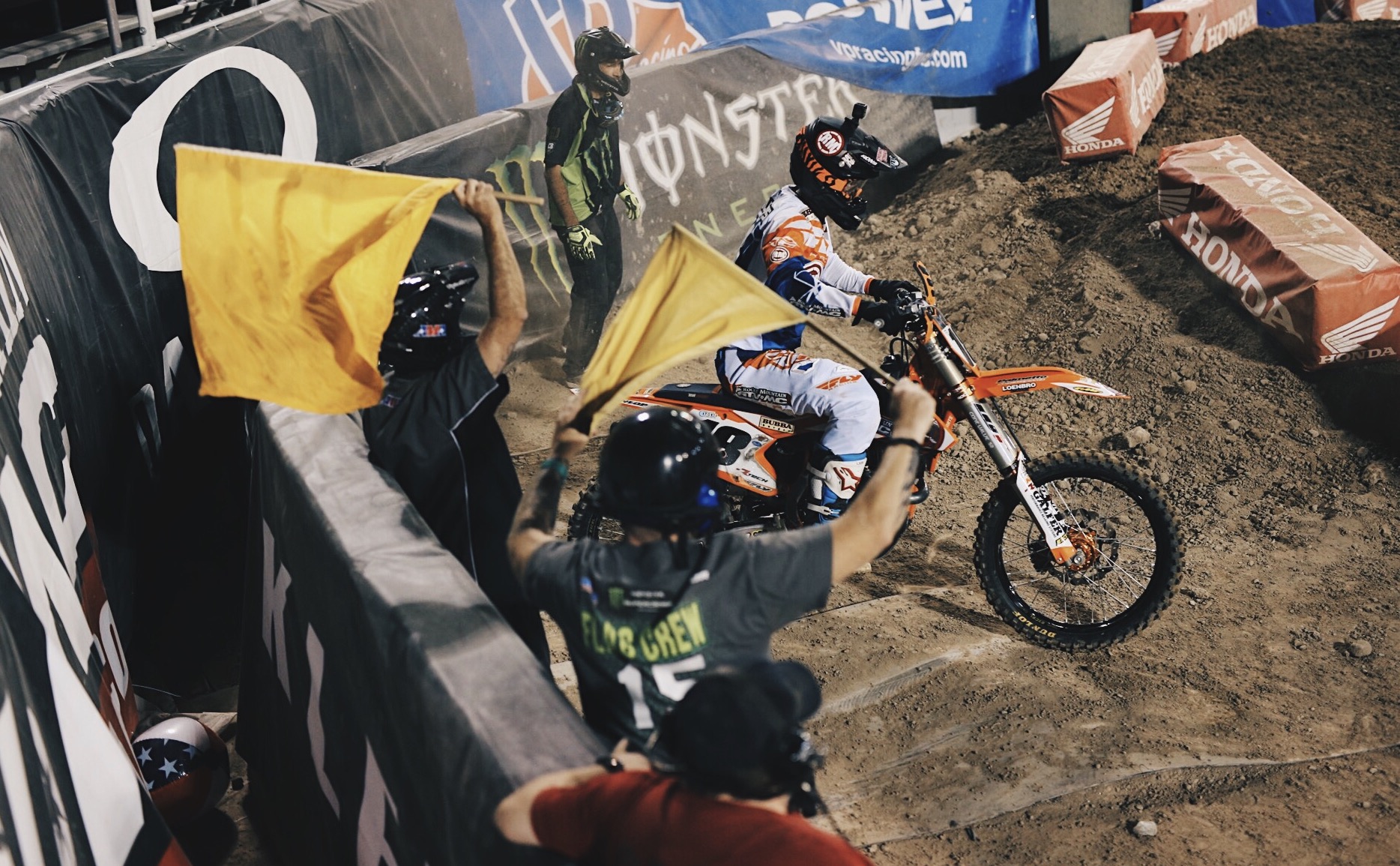 Once the qualifiers started, dad took advantage of his media vest and went down to the track to shoot some up close and personal action shots. I’d say he did pretty dang good considering we were the ONLY photographers without those mega massive lenses that all of the pros have. We stood out like a sore thumb with our Canon 6D and fixed 50mm lens. 😂 But we were so officially official with our vest! 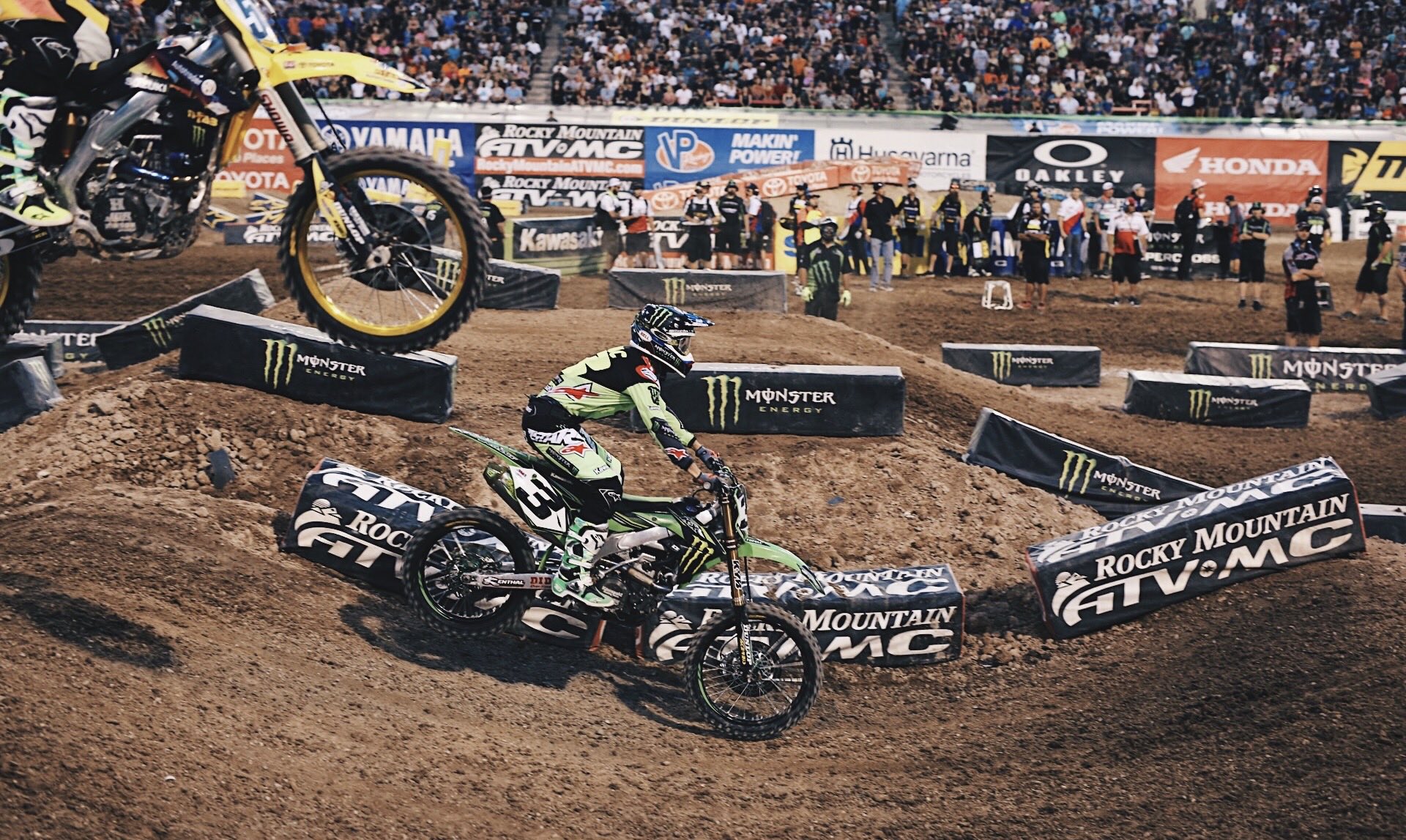 After shooting on the track we all reconvened in the press box to find a good spot for all of the final’s action. That box had been so slow the entire day and once 9pm hit, it was SLAMMED. You could barely walk around there were so many people watching. There wasn’t a single person even sitting in the stands. This was the last race of the season and with the drama between Tomac and Dungey, we were all anticipating some major action. And we were NOT disappointed.

Cliff Note version – The last 450 race was INSANE. Tomac ended up passing Dungey on lap one. If you’re not aware, these 2 have some major drama going on… It was a cat and mouse game for laps on laps until Dungey made his pass on lap 14. A short time later Tomac dove to the inside of Dungey, forcing contact and sending the KTM rider off the track. And then end gets so good I have to let my good friend Sean tell the rest. Reading it makes me feel like I’m right back out there watching it in person.

As the field took the white flag for the final lap the capacity crowd rose to its feet as Dungey continued to manage about a bike-length deficit to Tomac, seemingly waiting for a final opportunity to make a move and potentially steal the win. As the leaders approached the track’s lone triple jump for the final time Tomac went high and suddenly dropped off the pace, which allowed Dungey to easily move back into the lead. Tomac’s brief slowing appeared to be intentional as he jumped right behind Dungey and came in with another aggressive pass in the next corner. The two made contact again, forcing both to stop completely and nearly go off the track. That allowed Anderson to dive under the lead pair and jump from third to first with just a few turns remaining. Grant briefly followed into second, but Tomac regained his momentum and got back by. Dungey received the worst of the situation, falling from second to fourth, but he kept his KTM on two wheels and settled for the spot he needed in order to ensure the title.

Anderson went on to take an unexpected win, the third of his career and his first of the 2017 season, by 1.8 seconds. Tomac followed in the runner-up spot after leading 17 laps, with Grant claiming his first podium finish of the season behind his teammate in third. Needing a finish no worse than fourth, Dungey brought his KTM home just off the podium. 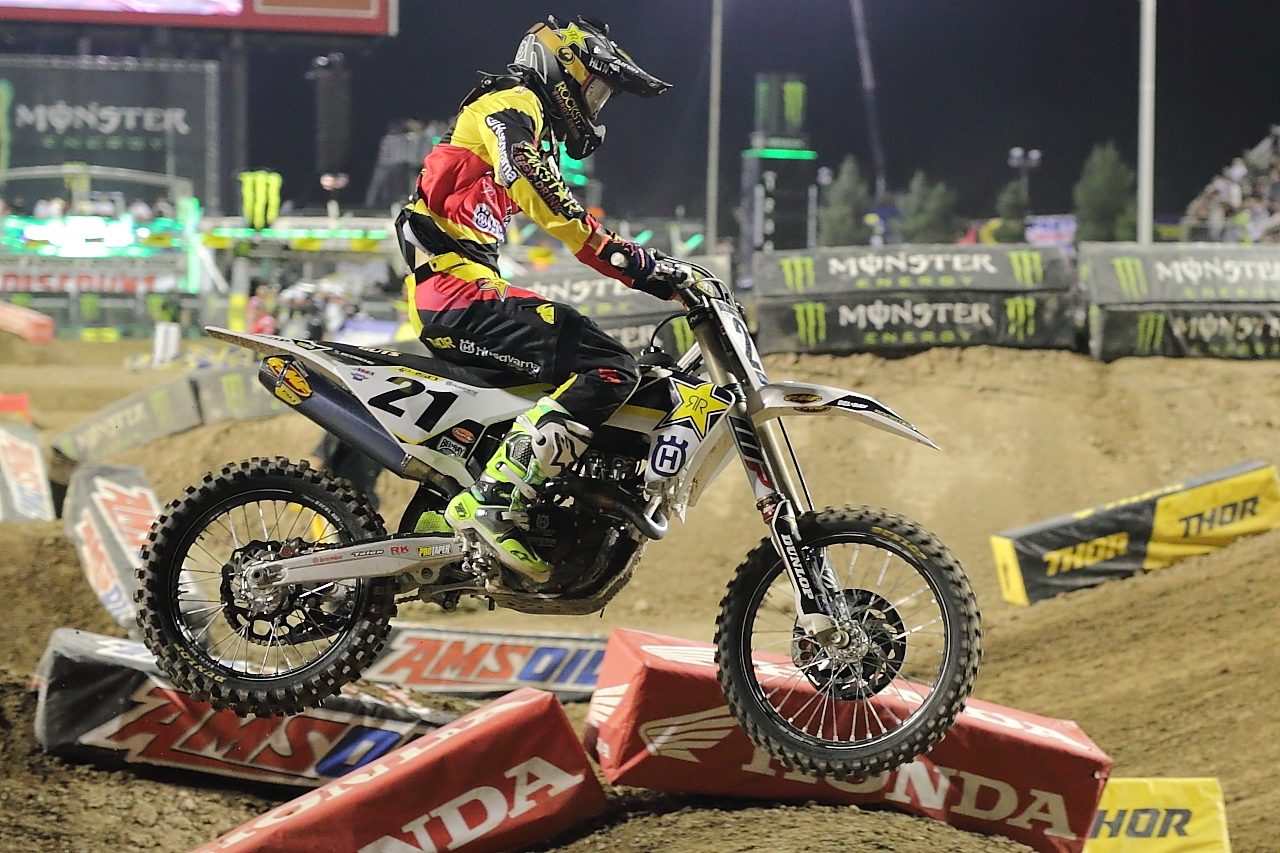 The weekend was made even more special when I got to have a private shoot with Thor motocross gear and famed sports photographer; Tyler Tate! We had full reign of the Hilton Lake Las Vegas and definitely took advantage! 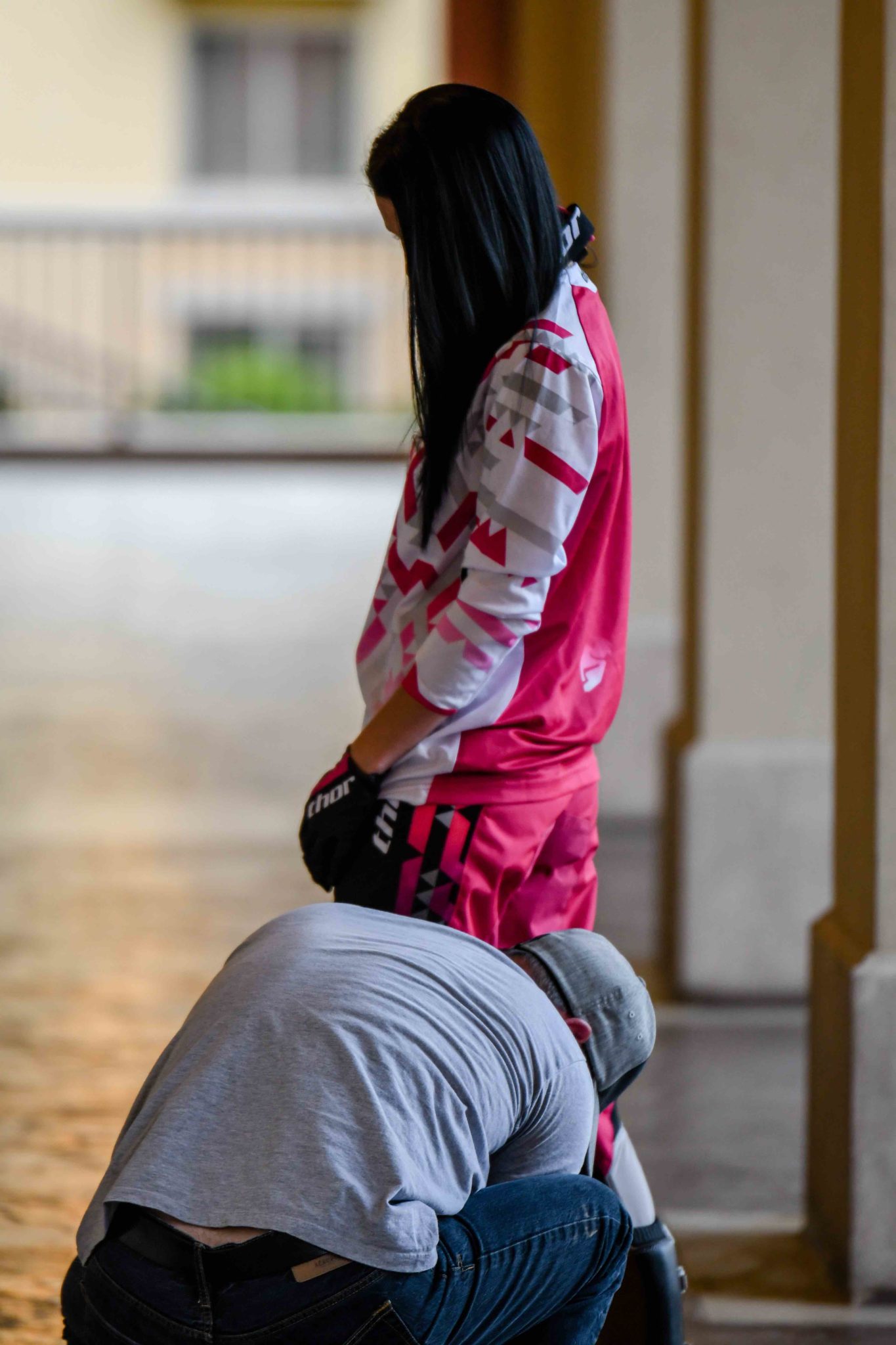 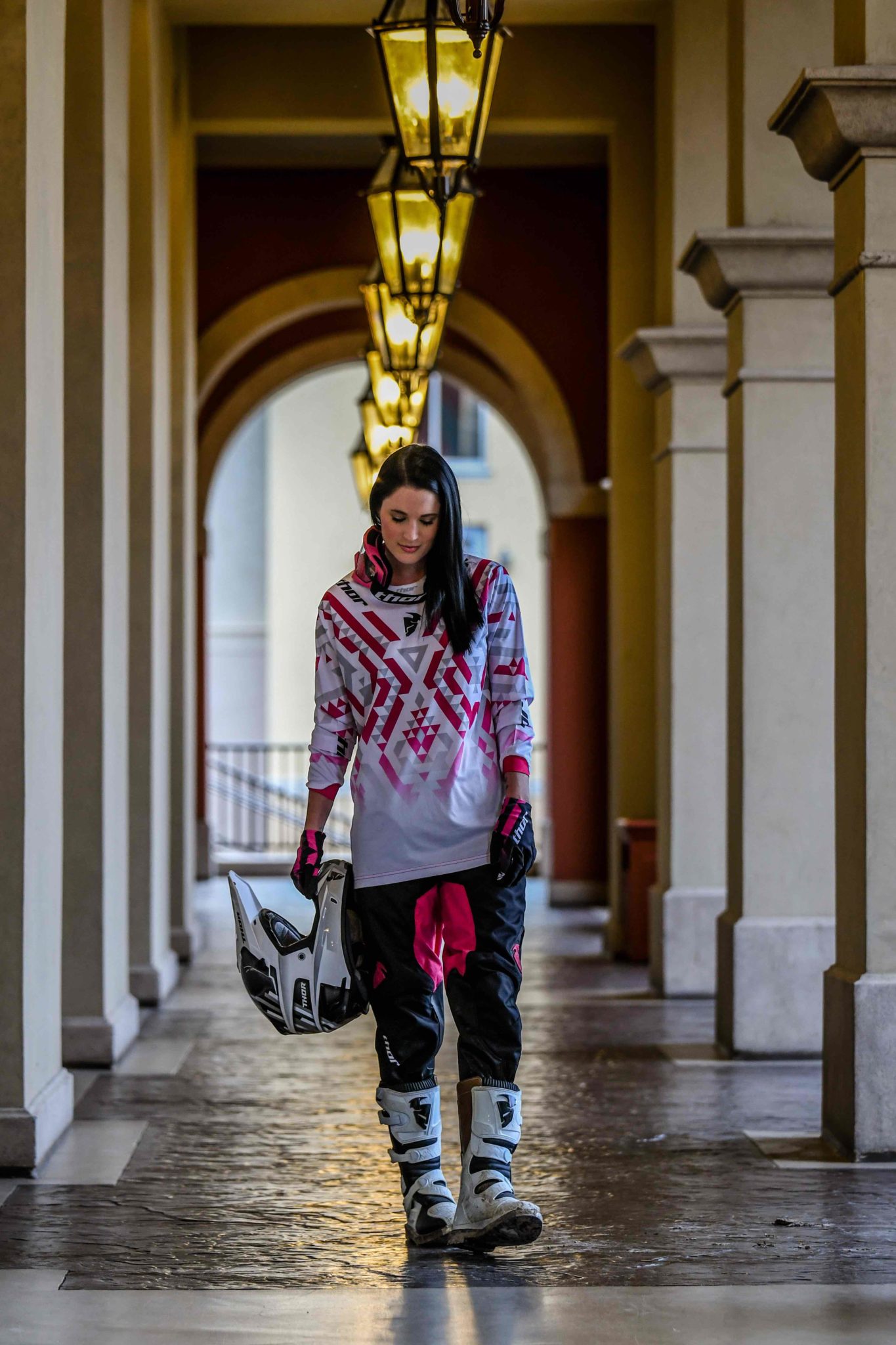 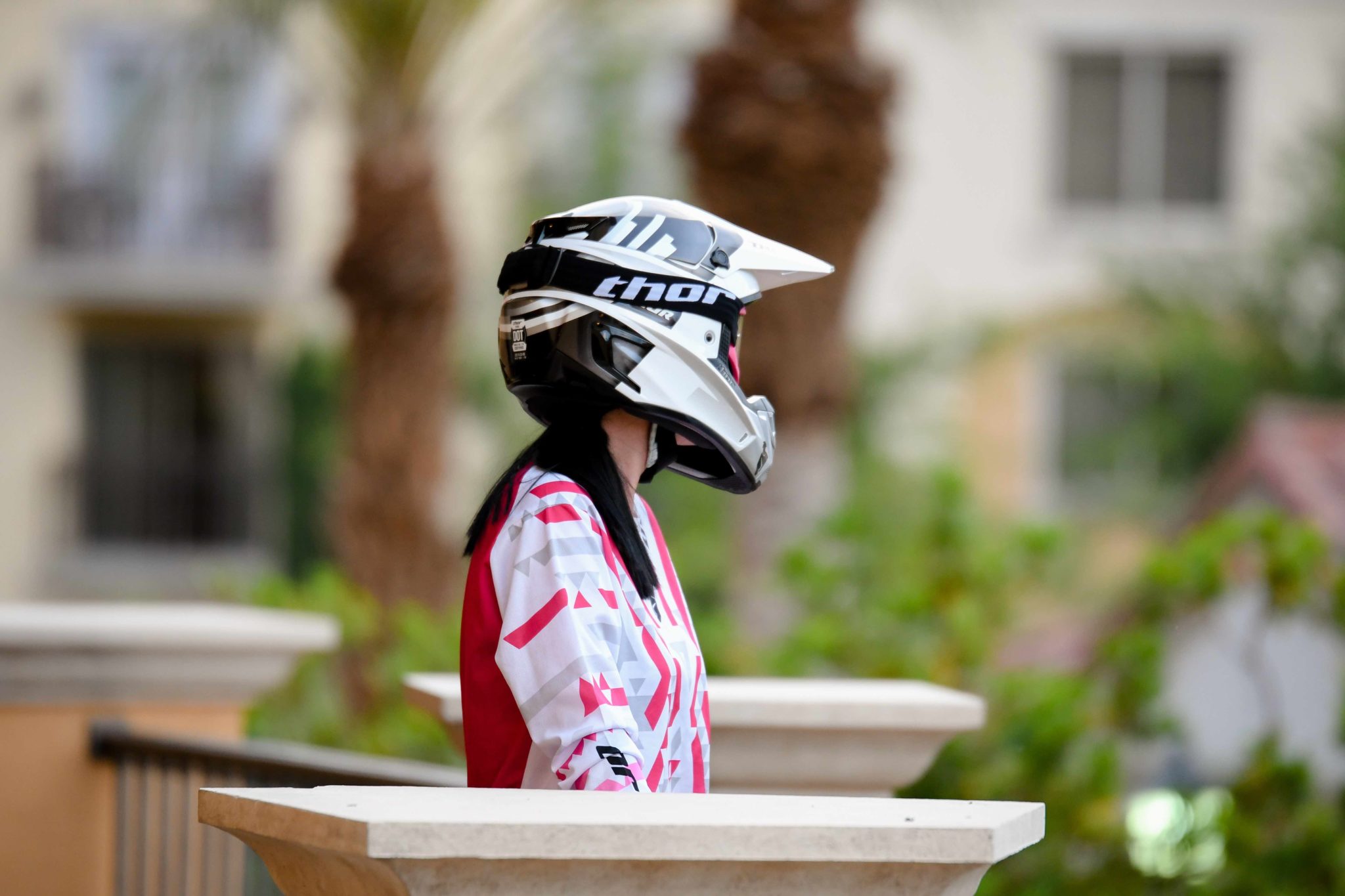 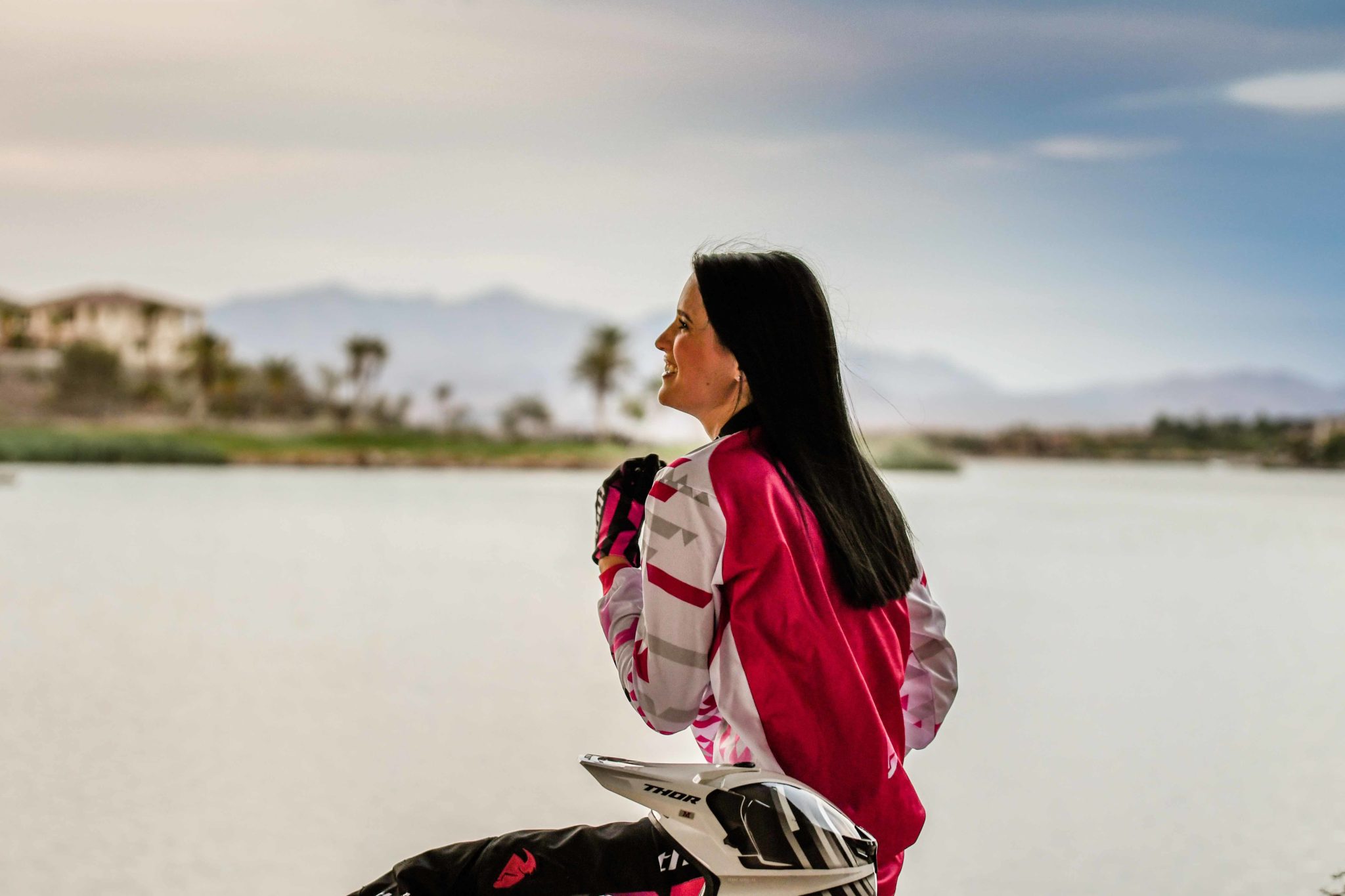 A HUGE thank you to Sean Brennen for taking such good care of us and making our Supercross trip one for the books!

You may also enjoy: