Hooray for Wifey Week! Even though I’m not technically a wife YET, I will be in ONE month!! I partnered with ILY Couture this week to share our super crazy Colombian engagement story! I’ve realized I have been the worst fiancé in the history of all fiancé’s and never shared how it all went down! I’m only a year behind it sharing it, but hey, better late than never, right?! 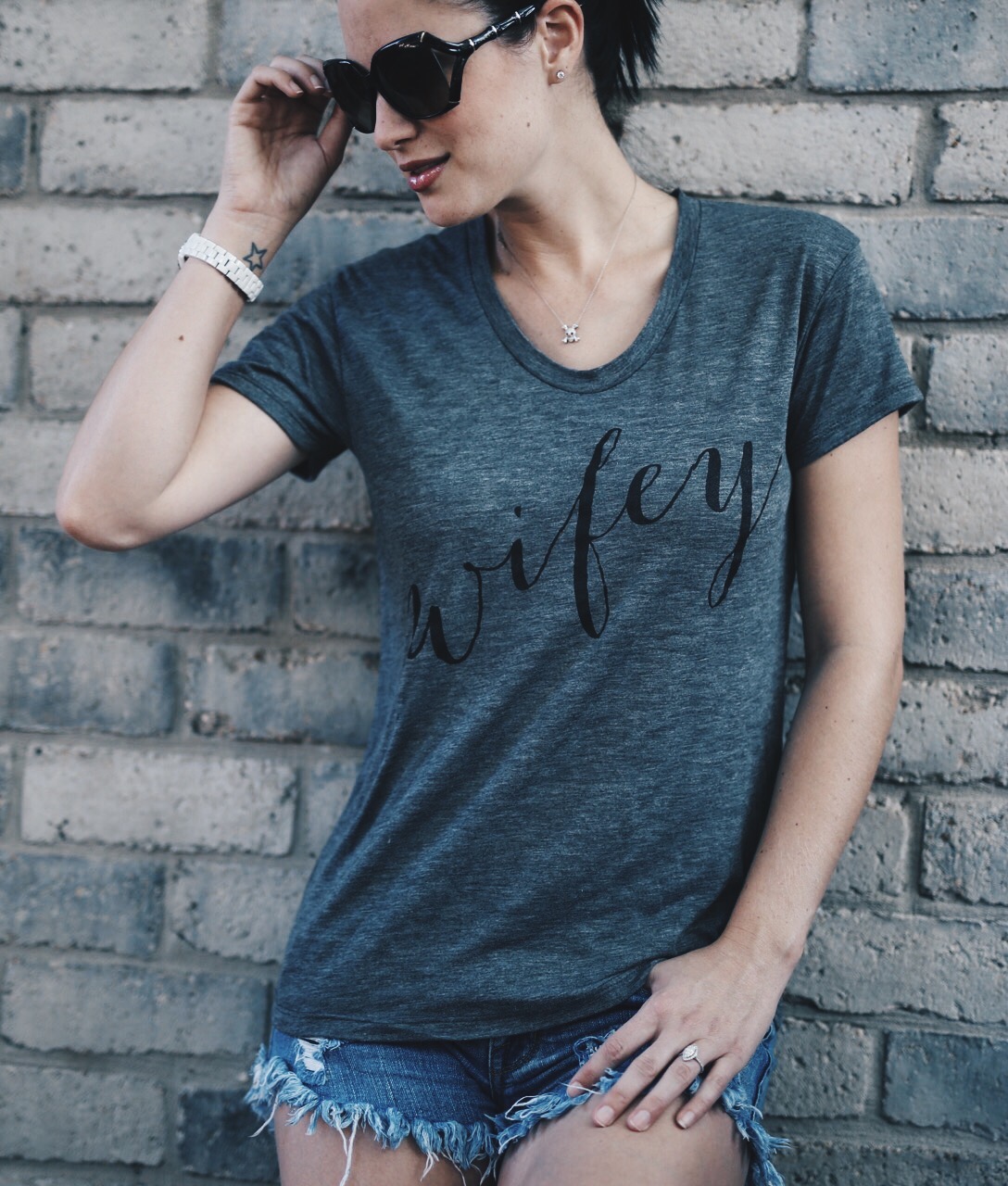 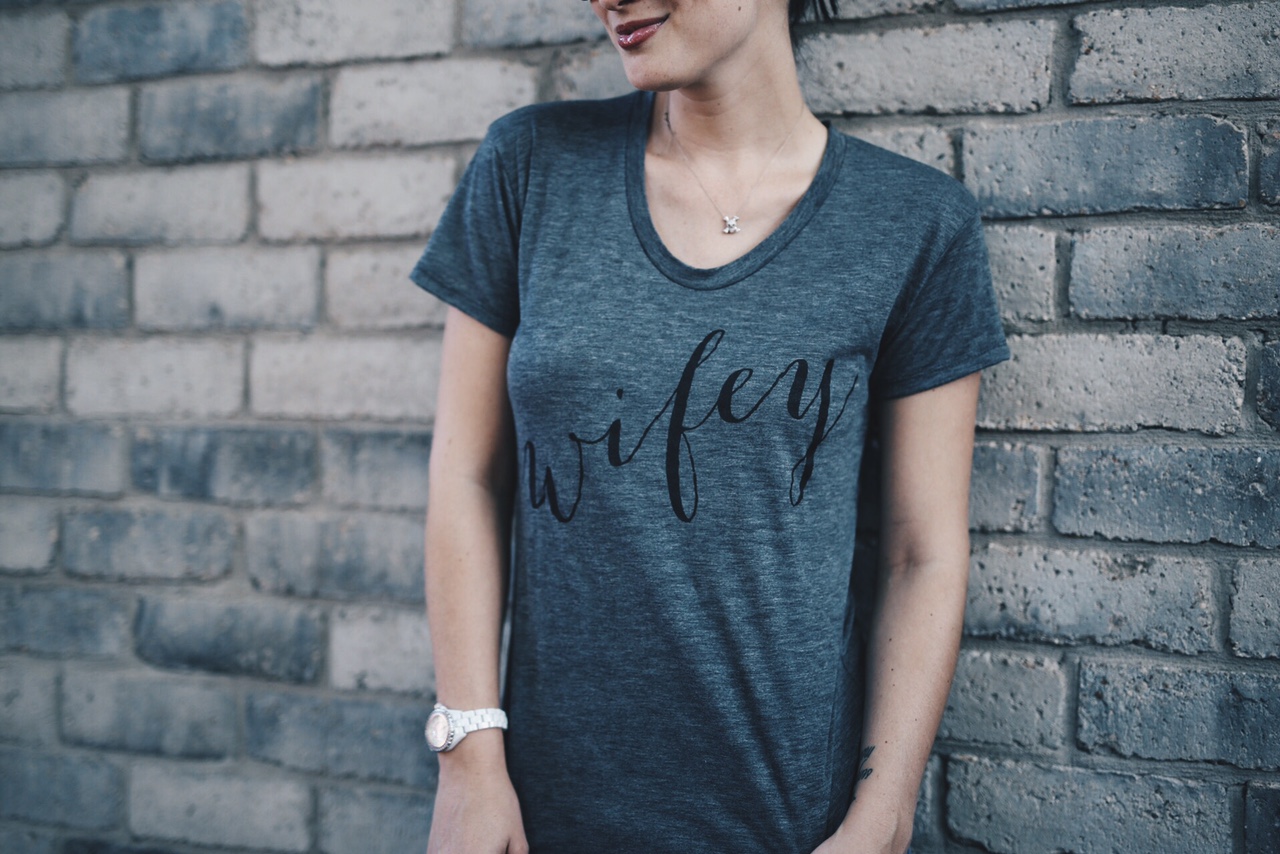 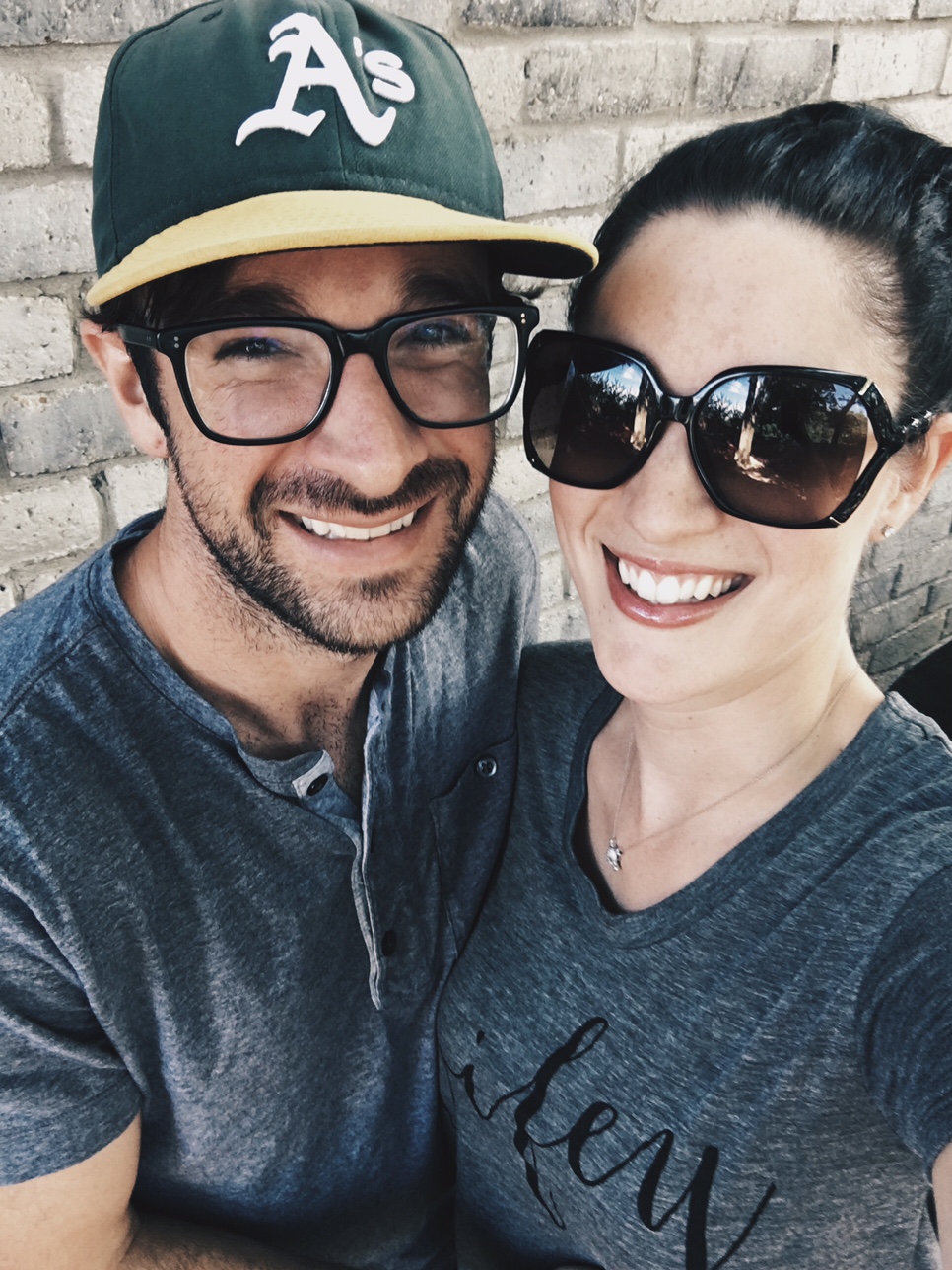 It all started a little over a year ago. Grayson and I had been talking about taking the plunge and quickly decided to make that a reality. We found a local family jeweler, Kreuger’s, that I’ve worked with in the past and decided to go the custom route and design something special. We mainly went that route because I didn’t trust Grayson’s judgement to get me a ring I would want to wear forever! hahahaha SORRY honey! 🙂

We stopped by one weekend to go over design details and immediately fell in love with the most gorgeous marquee stone. It was perfect cut and clarity and was about to be shipped off to a jeweler in New York. Ummmm NO! I immediately put a stop to that and snagged that baby up for myself! We started the design process and the final product blew me away! It was amazing to see both of our reactions to the ring. Definitely one of the most special bonding moments. I know most of you girls love to be surprised with a gorgeous ring, but designing something together was absolutely amazing and just as romantic. It’s not like I knew what he would actually be doing on the engagement side of things, so I let that be the best surprise ever.

Now, for the engagement! Grayson had visited Colombia about 6 months prior to us purchasing an engagement ring and always raved about how amazing it was. For months and months he tried to get me to go with him on this trip and in the back of my head I was thinking… HELL NO! People get kidnapped there. It’s unsafe. I’ll get robbed. I don’t speak Spanish anymore. NO. NO. NO!  Well, a few months later, I gave in. Spur of the moment because that’s the only way he would get me there. We planned out trip for about a week and wanted to stay in multiple parts of the country.

Thankfully, Grayson knows a very successful family in Colombia that offered to host us during our entire trip. This was essentially the only way he could ever get me to go to Colombia. I told my mom we were headed there and she wasn’t pleased. At all. I assured her it would all be ok… Like I even knew. Deep down I was scared shitless! So, we booked the trip and were on our way. Little to my knowledge this would be where he was going to pop the question.

SO. We land in Colombia. Can I just tell you, the airport was a mad house! I mean, people EVERYWHERE!!! I wish I would have taken photos of the madness that was outside. Honestly, I have absolutely no idea how we found Felipe, our friend that was hosting us. There were hundreds and hundreds of people everywhere, screaming in Spanish, holding signs, staring, wanting to give you a ride… It was intense!

We quickly found the car and headed to our first hotel in Cali, Colombia; the Acquasanta Lofts. HOLY MOLY, this place was ridiculous! For the price of a standard hotel in Texas, we got a 2 story loft with a private deck and hot-tub. Floor to ceiling windows lined the walls; it was a dream! Literally, never wanted to leave. We settled in and went out to dinner, hoping someone spoke English! We spent a couple of nights there and on the third day we were planning to go to Felipe’s family’s lake front property on Lago Calima (Lake Calima). With no rental car and my concern for our safety, Felipe got us a body guard and private driver. Did you know some of the wealthier families in Colombia have armored cars?? It was a major relief when I heard we would have someone driving us around. Cali isn’t a tourist town, which meant there weren’t many Americans. AT ALL. We were told to keep our possessions in our bags because people on mopeds could rob you at gun point. Especially, when the new iPhones came out. Those things are gold out there. They would have “homeless” people actually working for their money, cleaning windows or performing shows outside in the middle of the road. When, in reality, they would be looking into your car to see if you had any nice jewelry, phones, bags, etc. and then radio to the guy at the next light that you had all of this stuff and they would then rob you. Thankfully, that didn’t happen to us, but it happened to Felipe’s wife in the past. 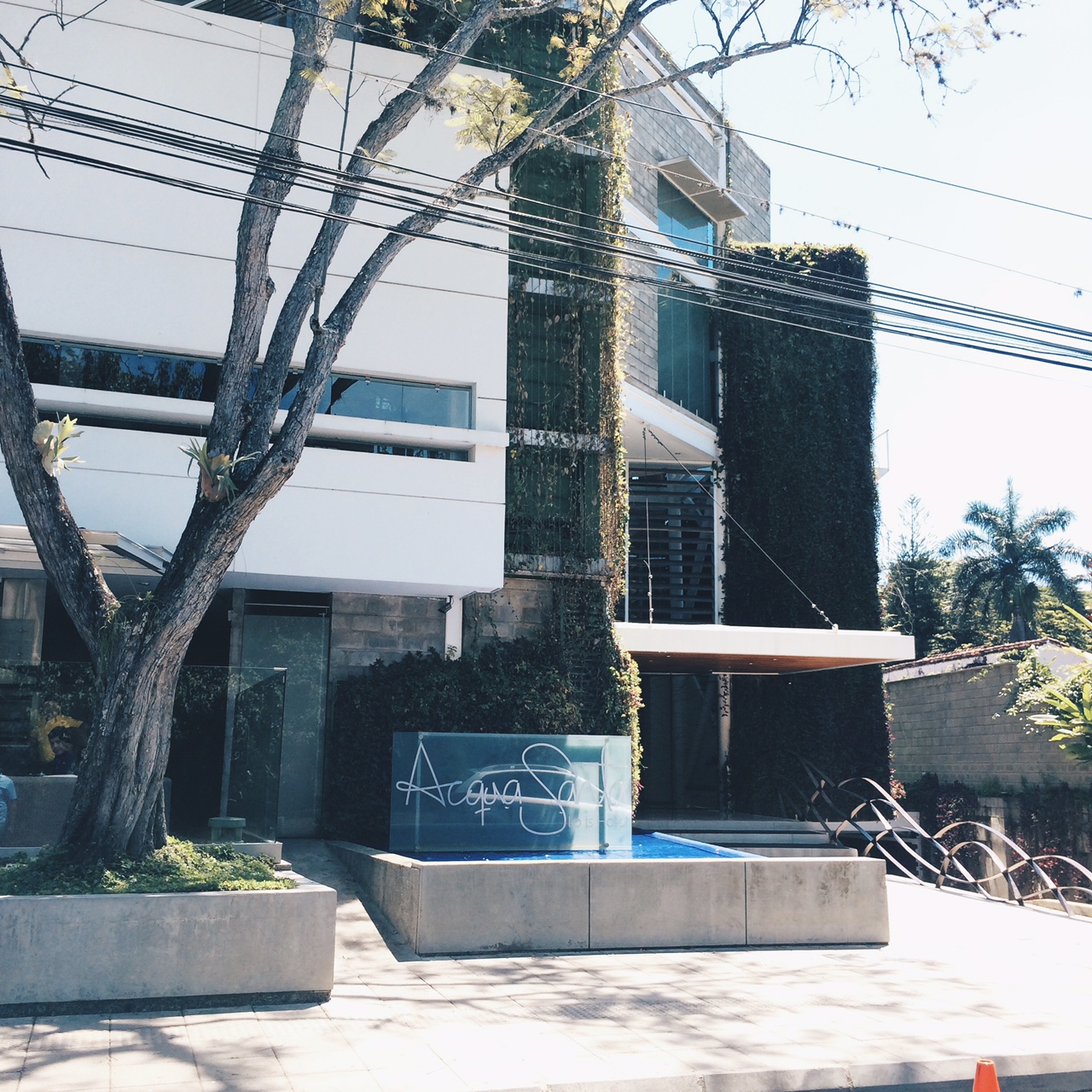 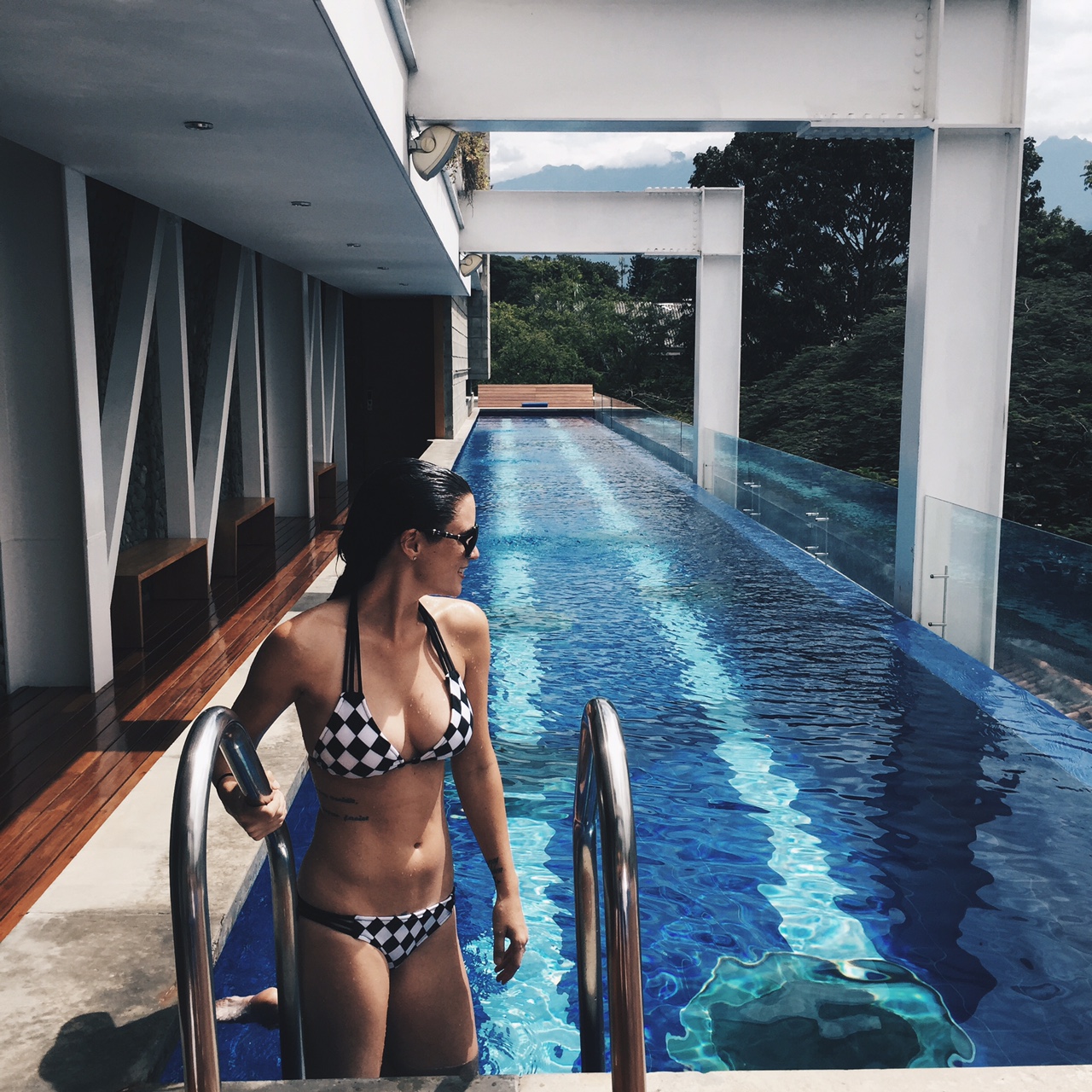 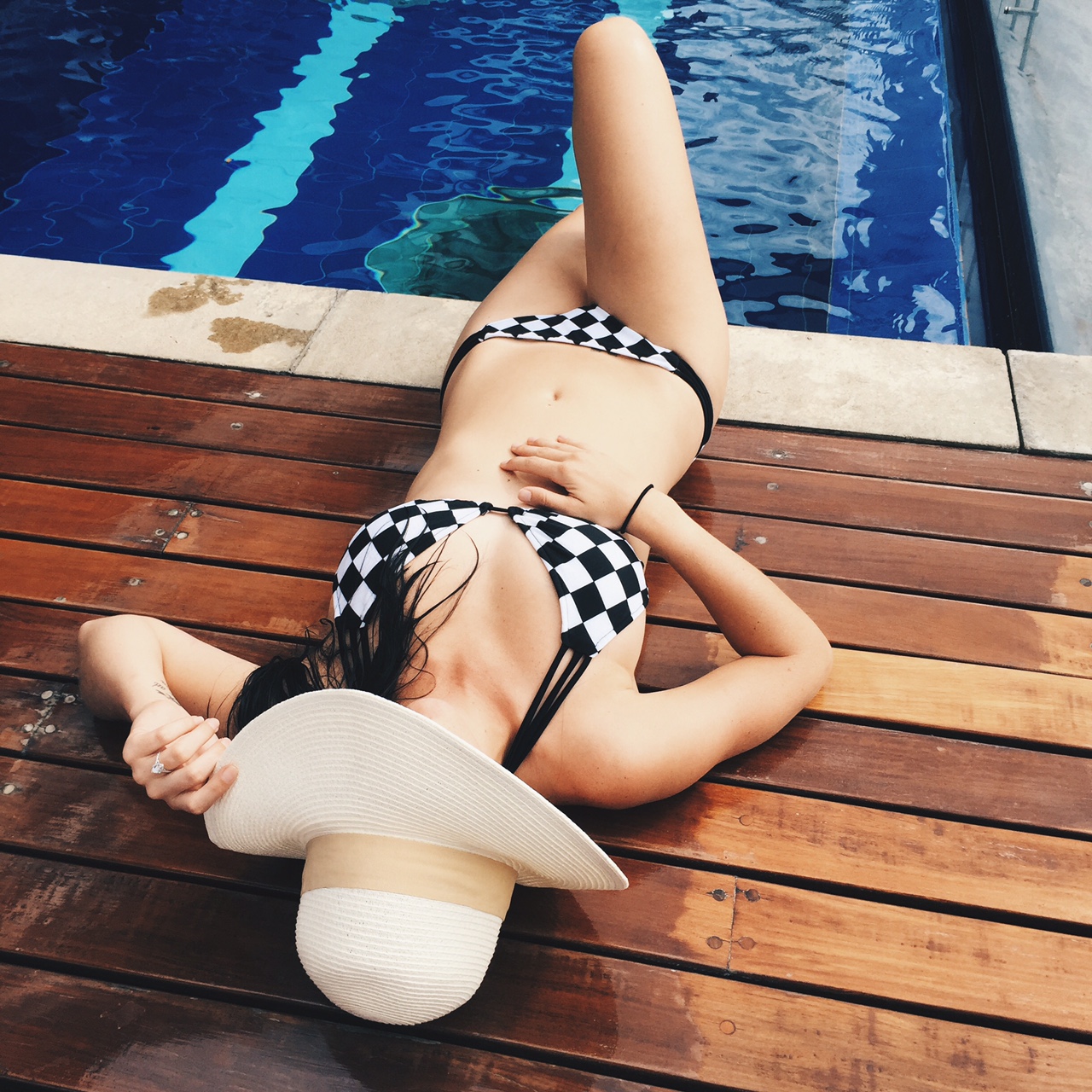 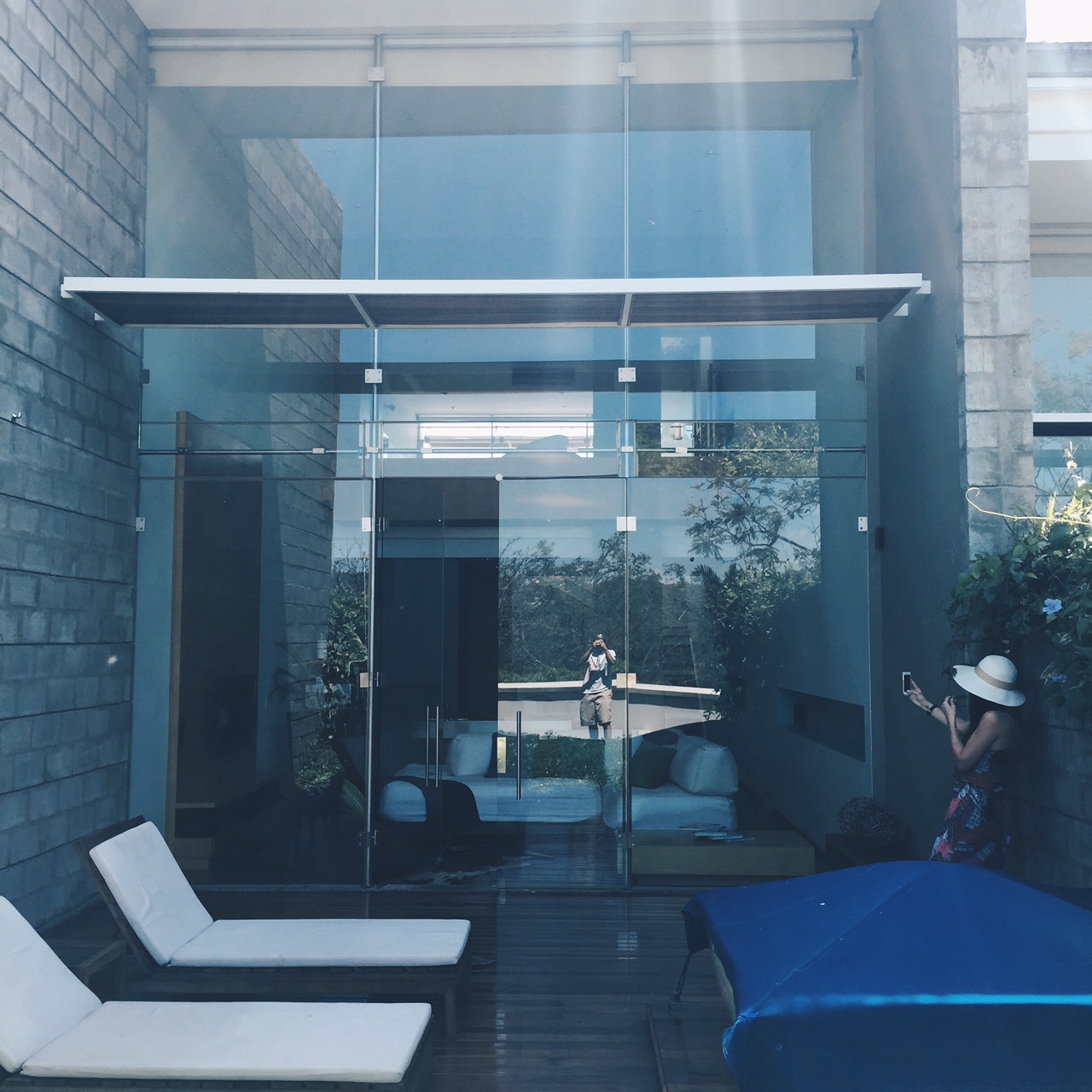 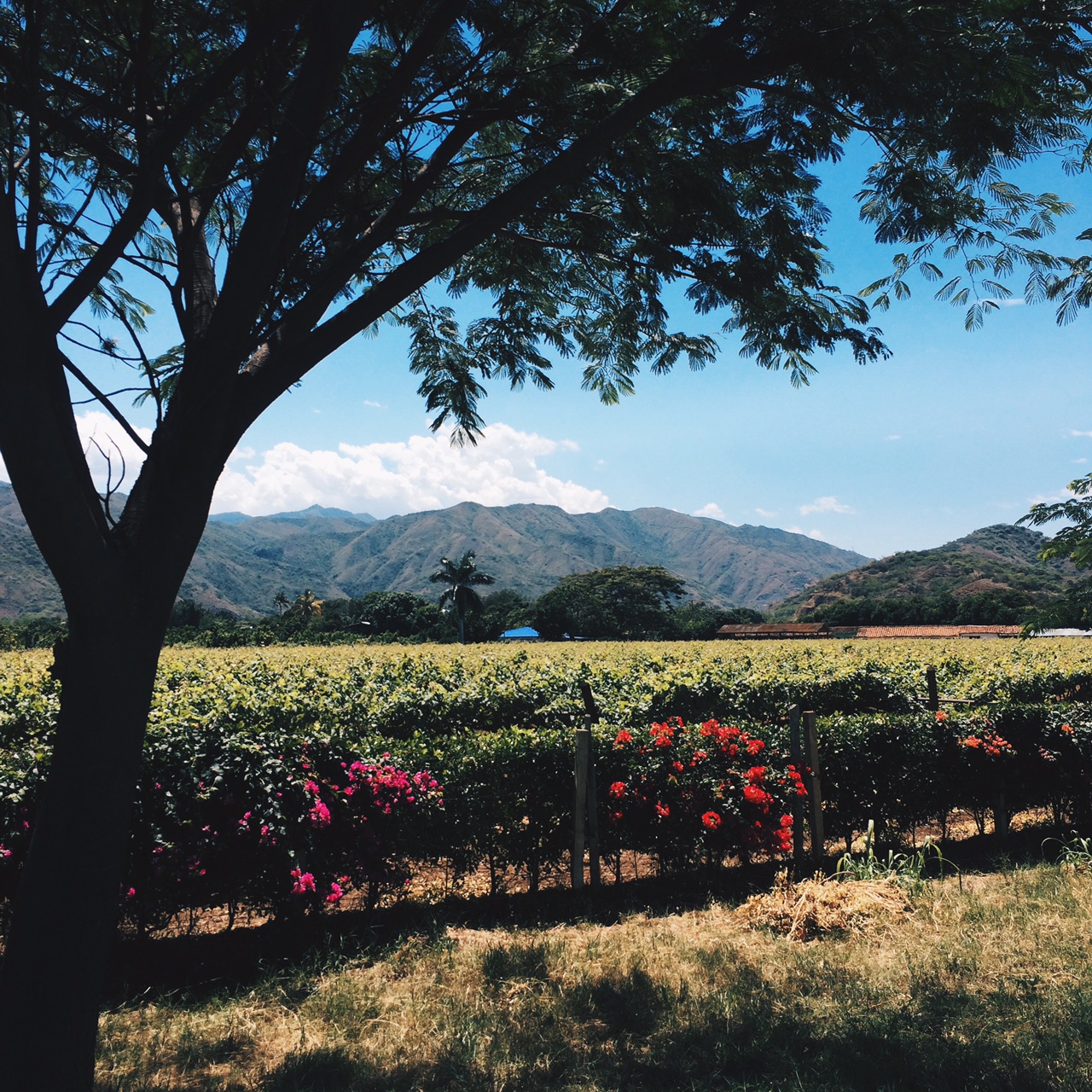 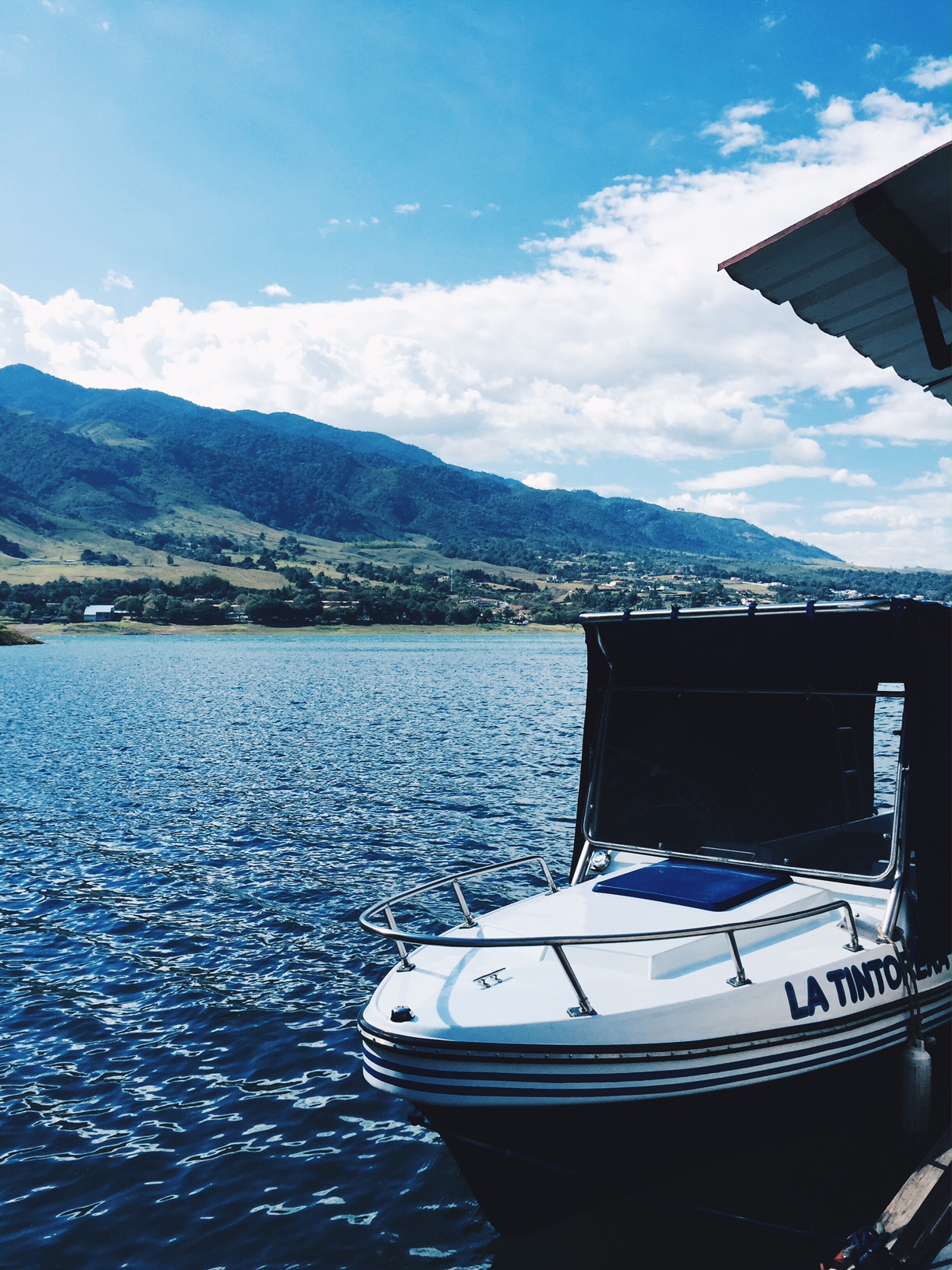 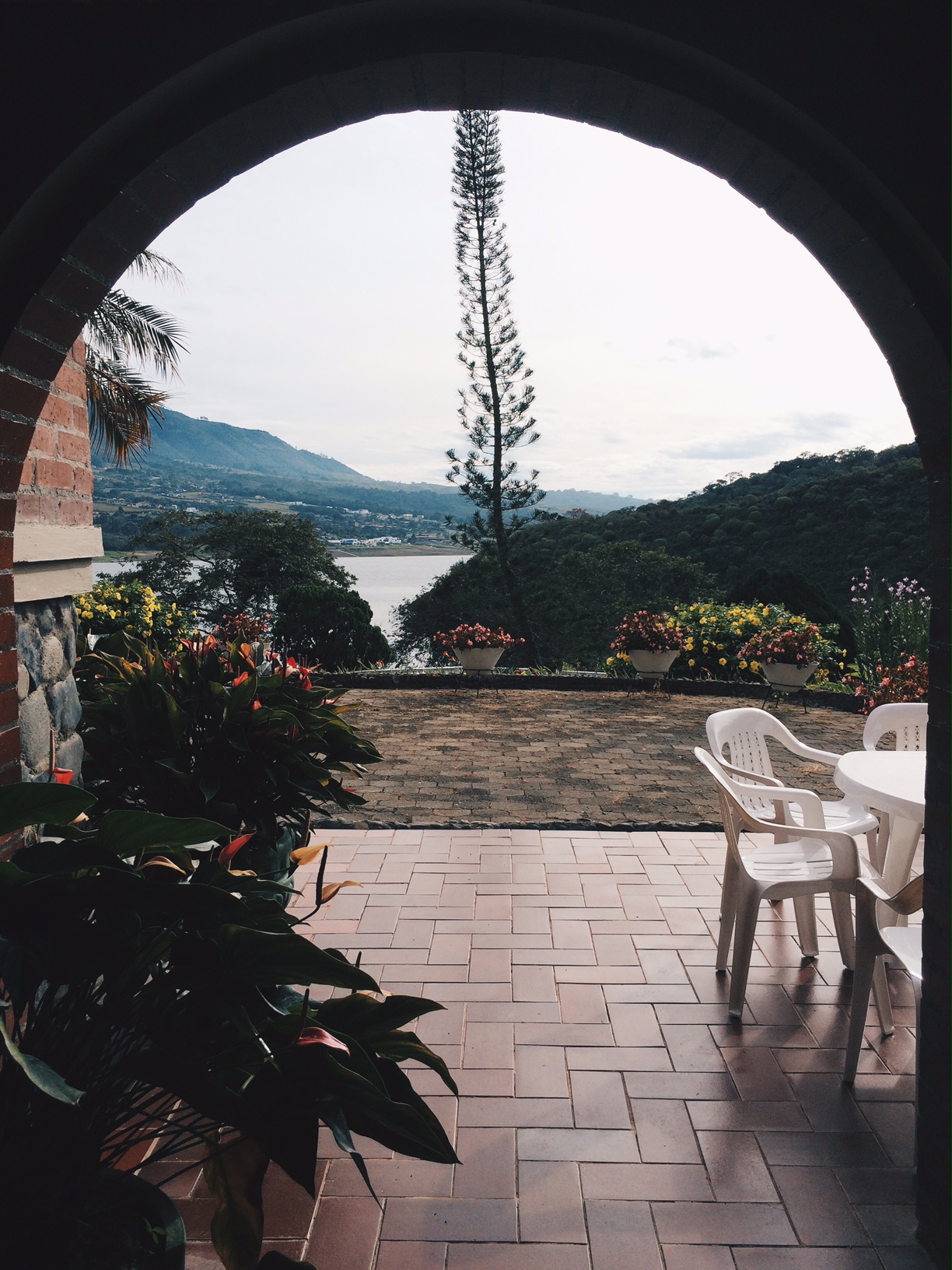 Now that I’m off that tangent… We arrived in Calima and spent the day on the lake. It was beyond gorgeous; such beautiful weather! That evening we were told that Felipe (the ONLY person that spoke English) was leaving us there with our driver, who spoke no English, because he would be driving us to this amazing waterfall in the mountains of Lake Calima. We were told there were only certain times of the day we could go up there, as guerrilla warfare is extremely prevalent out there. And me being super anxious, I wanted to get there and leave immediately!! (Little did I know, this was where Grayson had decided to propose!) Anyway, I was warned that Felipe’s family had a bungalow on this property and that they have 2 massive attack Rottweilers running loose on the property to just demolish anyone that trespassed. We were told that we needed to call the “Machete Man” (as we called him) to chain up the dogs so we wouldn’t get attacked. Super romantic, huh?! It actually was, so keep reading!

We arrive to this fenced off, private estate which seemed to be the middle of know where. We pull in and I immediately spot the dogs. In my entire life, I don’t think I have ever witnessed such vicious animals. They were HUGE and angry! We quickly changed into swimwear and followed our body guard and Machete Man on our long hike up to this waterfall. We were legit in the middle of the Colombian forest at this point. There were centipedes that were over a foot long, crazy wildlife and plant life everywhere. Hence, the reason we called the dude Machete Man. He had the most rusted Machete and he was slashing trees and plants to cut a path for us to walk up to the water. At the same time, our body guard was cutting coconuts off of the tree for us! Now comes the most awkward, surprising and sweet moment ever. We get up to the waterfall and it is beyond beautiful. The water is so clear and FREEZING, I didn’t want to get in all the way. We gave the guys are phones, who remember, don’t speak any English, and Grayson is signaling for them to take photos. HILARIOUS moment! So, as we are in the most serene and gorgeous place I’ve ever seen, Grayson reaches into his pocket and pulls out the ring and gets down on one knee. I was too excited, I don’t even remember what he said, but I know I ended it with a YES!! And then, we look over and the 2 dudes are just staring at us cheering… hahaha, it was the funniest moment ever! We swim around for a while and get out to take a look at the photos and they are ALL blurry! HA!! Apparently Machete Man doesn’t take photos that often because we had to reenact the whole thing in a different area of the forest. To end our super thrilling engagement, we try and leave and our driver’s car won’t start! At that point, I’m freaking out and thinking I’m going to die! We roll the car out of the gates and sit in this tiny driveway trying to flag down 18wheelers to jump our truck! Imagine, the two of us, super white people sitting in the back of this truck with our huge body guard/driver trying to wave down a truck. Another hilarious moment of this trip. While we’re waiting, Machete Man runs across the highway to his house and his wife walks over and brings us Cokes and homemade cookies! How freaking sweet!! We finally flag down a huge dump truck that is able to jump our truck and get us back to our Cali hotel. Either way, it’s the memory that counts and I couldn’t have been happier with how it turned out. Apparently, Grayson and Felipe were in on this plan and wanted to make this trip beyond special for me. After that we flew to Bogota for a couple of days until we headed back home to see our family and friends to tell them the good news! Overall, as freaked out as I was and as sketchy as this story may sound, it was one of the best trips of my life and I would go back in a heartbeat as long as I am there with the right people, of course! 😉

Find out more or adjust your settings.